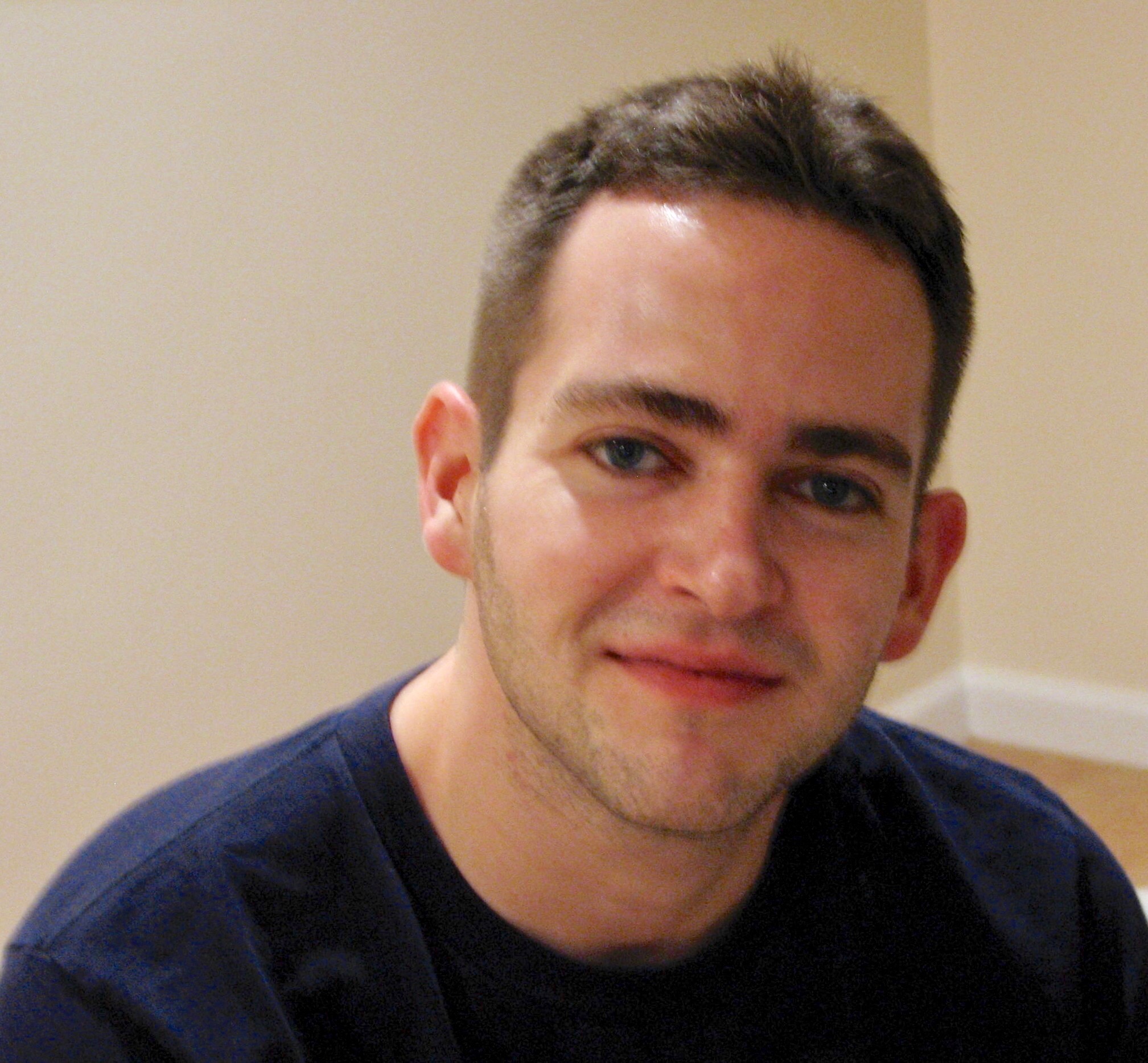 On Tuesday, November 28, the New School held a panel discussion titled “anti-Semitism and the Struggle for Justice”. A few friends and I attended to witness this public relations stunt. With the help of these friends, I also protested this charade inside the auditorium by distributing flyers throughout the event.

I’m a progressive and a Zionist. For years, the attempted mainstreaming of anti-Zionism has increasingly disturbed me. In that way, this event wasn’t uniquely bothersome. What compelled me to protest this one was its staging of speakers concerned about the anti-Semitism they actually help fuel. These speakers were posing as guardians of a Jewish community they famously detest. I was genuinely concerned that well-meaning people who didn’t know the issue would be confused, taken in by slogans, and exposed to a false narrative without a response.

Every one of the six speakers was an anti-Zionist. There were no other voices, so I wanted the audience to know what Zionism is, that most Jews are Zionist, and understand the difference between constructive criticism of Israel and actual anti-Zionism, which is the advocacy for Israel’s demise. I stated that when anti-Zionists accuse millions of Israeli Jews and their millions of Jewish supporters of racism and apartheid, Jews are increasingly hated, targeted and attacked. I restated the panelists’ past Jew baiting remarks and actions, and called for anti-Zionists to end their boycott and public mockery of Zionists and engage in a long overdue conversation.

The event described itself as “a discussion of how to combat Anti-Semitism today.” Their answer was provided early on: be an anti-Zionist! Panelist Lina Morales said, it’s “because I love the Jewish people so much that I hate Zionism…with a passion!” It’s bizarre that the movement for Jewish liberation, the source of pride and empowerment for millions of Jews, is hated with a passion by someone ostensibly concerned with Jewish welfare. “Safety for Jews is rooted in connection and solidarity,” according to panelist and Jewish Voice for Peace Director Rebecca Vilkomerson. While alliances and solidarity are important, Jews have learned the hard way that their security shouldn’t rest with other groups, with different priorities.

If you follow the problem of anti-Semitism, you’re likely aware of the disturbing trends: last year’s FBI Hate Crimes Report listed Jews as the country’s most targeted religious group. On college campuses, Jews are harassed by student mobs, which also make sure to shut down their Israel events. Jews in Europe are assaulted in the streets, and fleeing in record numbers. The world’s largest Jewish community – Israel – is under constant physical and ideological assault.

Anti-Zionism is a driver of these hate crimes against Jews, which explains why the anti-Zionist panelists specifically avoided acknowledging them. Instead, Morales made the absurd claim that “anti-Semitism is at a low point now, but it could always come back.” None of the panelists talked about how anti-Semitism actually manifests – outside Charlottesville and Trump’s associations and tweets. The notorious anti-Semite Louis Farrakhan was mentioned (since panelist Linda Sarsour has praised him) only to dismiss his relevance. “His hatred doesn’t endanger Jews,” Morales falsely assured us.

Actual Jewish people and their very real experiences were not in evidence on the panel, with the exception of anti-Zionist Jews. According to the panelists, the only Jews targeted with hate these days are anti-Israel Jews. The idea that critics of Israel can’t seem to get a public hearing without being branded anti-Semites is not rooted in reality. Daily articles report all sorts of accusations against Israel, barely any of them researched. Op-eds critical of Israel far outnumber those critical of the Palestinians. This criticism against Israel is responded to with facts and analyses. Throughout the country, countless events and discussions (many of them within the mainstream Jewish community) critique Israeli policy. It needs to be well understood that anti-Zionists aren’t just pushing “criticism of Israel,” but its demonization and ultimately the rejection of its right to exist.

Vilkomerson cautioned the audience that “we need to use precise language.” Yet throughout the evening, complex terms and labels ironically all went undefined. Zionism, anti-Zionism, Palestinian rights, Palestinian resistance, Israeli Apartheid and “pro-occupation,” (a term JVP’s Rabbi Alissa Wise used to describe those objecting to the event) were just several of them. Near the end of the event, one of the panelists actually apologized for not defining “Mizrahi Jew” a term used throughout the evening. If people in the audience didn’t know what a Mizrahi Jew was, I questioned whether they would understand other terms. Finally, the “struggle for justice,” the event’s widely broadcast and compelling sub-title, went undefined and undiscussed.

What the audience did hear about the struggle for justice is that it has been subverted by the mainstream Jewish community. As Leo Ferguson outrageously said, "so many corners of the Jewish institutional world smeared Palestine solidarity and Black Lives Matter. Because of this, an actual white nationalist was elected to the White House"

To show how the charge of anti-Semitism shuts down debate, two examples were offered: the recent anti-Israel boycott legislation, which actually prohibits state funding of businesses that boycott Israel, and doesn’t prohibit any individual’s or group’s free speech. Vilkomerson then called New York Times columnist Bret Stephens’ comparison of JVP to white nationalists a “blatant attempt to shut down much needed conversation about Israel-Palestine.” While JVP is proud to have physically shut down pro-Israel events and to have rejected dialogue with Zionists, its director somehow sees a New York Times op-ed as shutting down discussion.

The mainstream Jewish community can no longer dismiss this loud minority of Jews who use their Jewish identity to immunize themselves from criticism. They will be held accountable for their defaming of Jews as supporters of racism and genocide. With hate crimes on the rise and real racists more brazen than ever, the stakes are too high for our people.

I and other progressive Jews challenge Jewish Voice for Peace, other Jewish anti-Zionists and detractors of Israel to join us in a discussion series. Together we’ll share our concerns and ideas, and address pressing issues like anti-Semitism, Islamophobia, Jewish and Palestinian self-determination, human rights, justice and pathways to peace. We may not find common ground, but there’s value in fleshing out these issues for all concerned Jews to consider.

During our flyering, I was approached by a man from Social Democrats USA. He said he and other Zionists with the organization support the Boycott, Divestment, Sanctions movement against Israel, and was interested in taking us up on our dialogue offer. I happily accepted. The only thing we may agree on is that the conversation about Israel is lacking. That’s a good place to start. 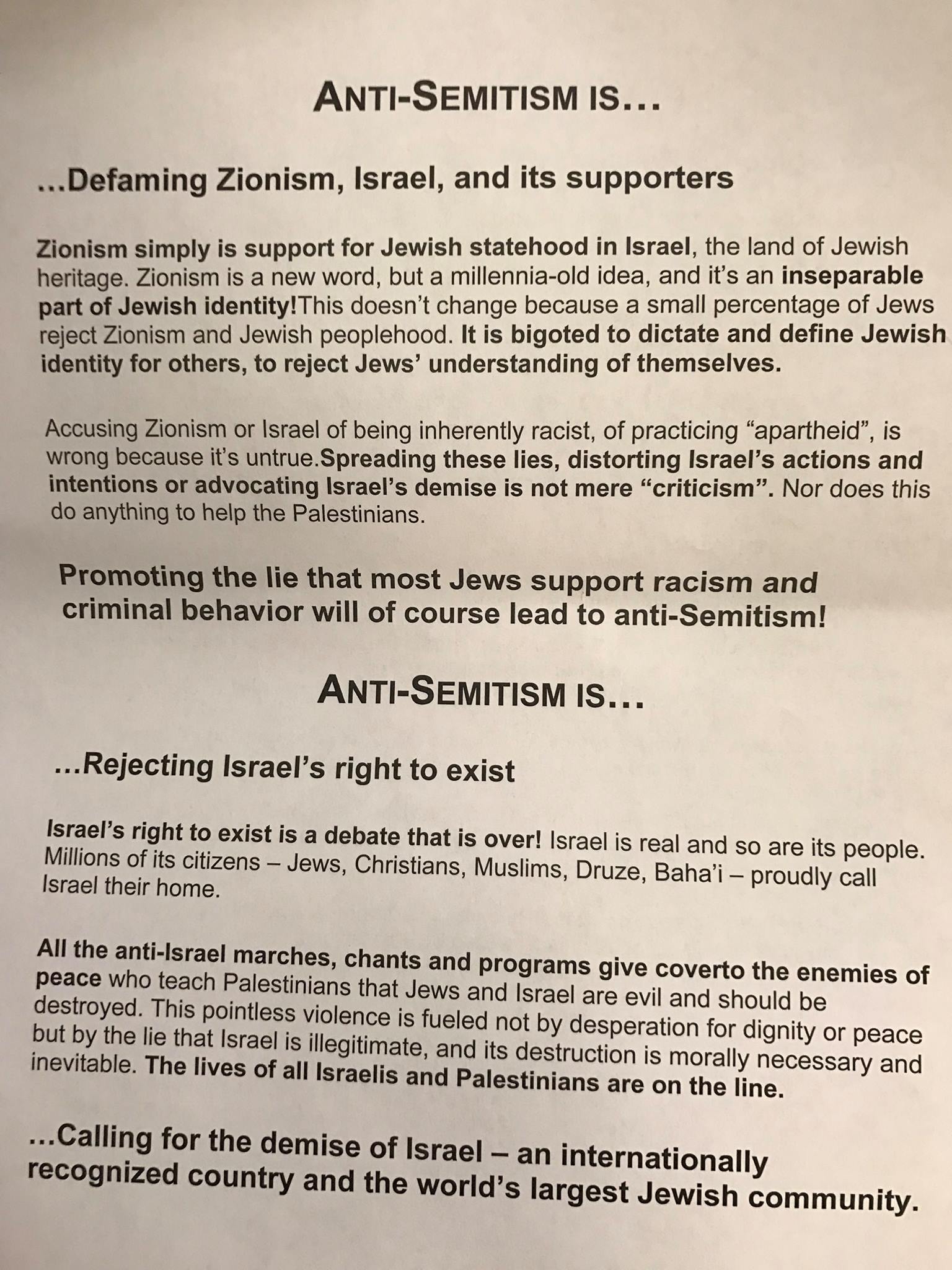 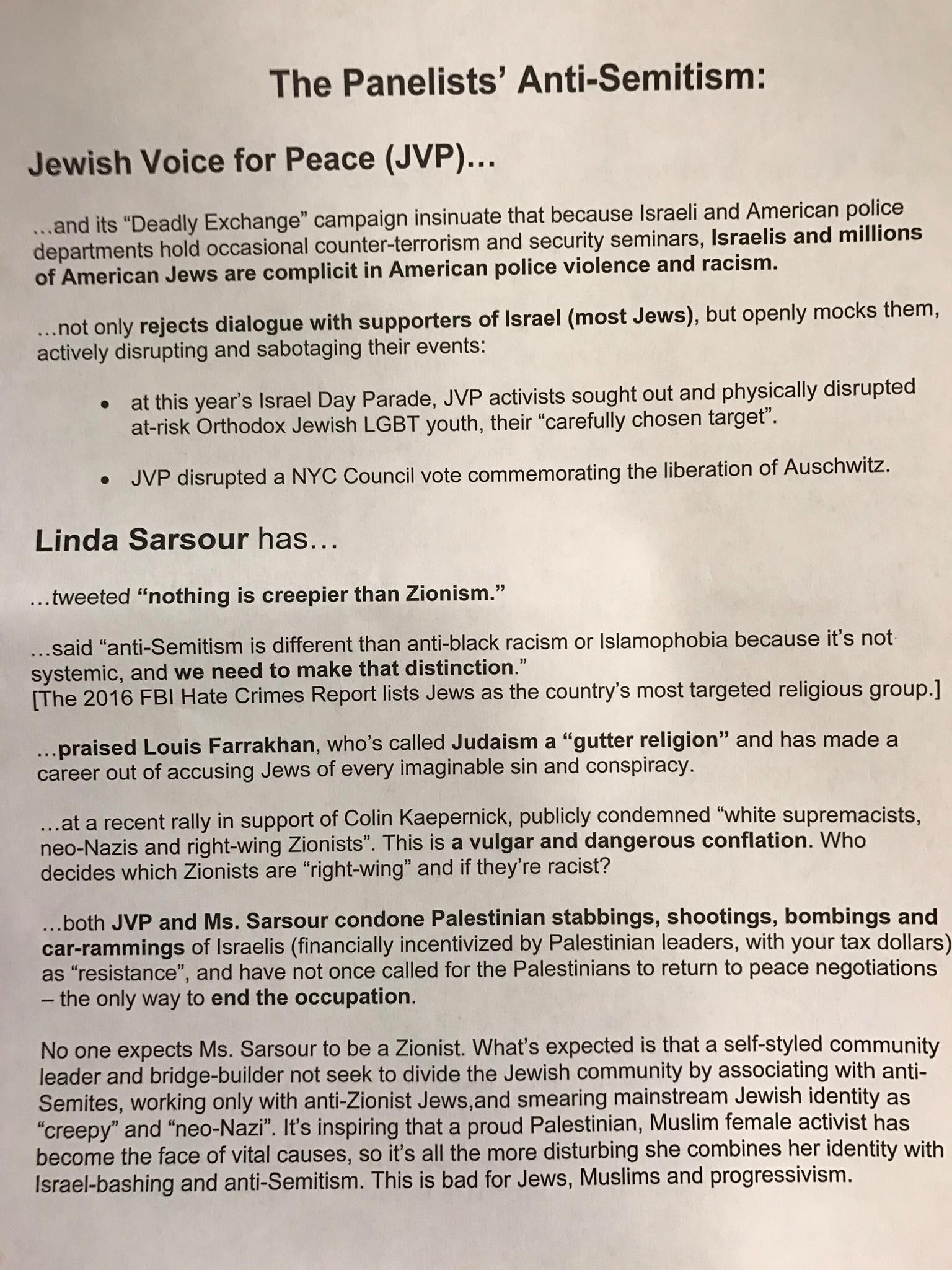 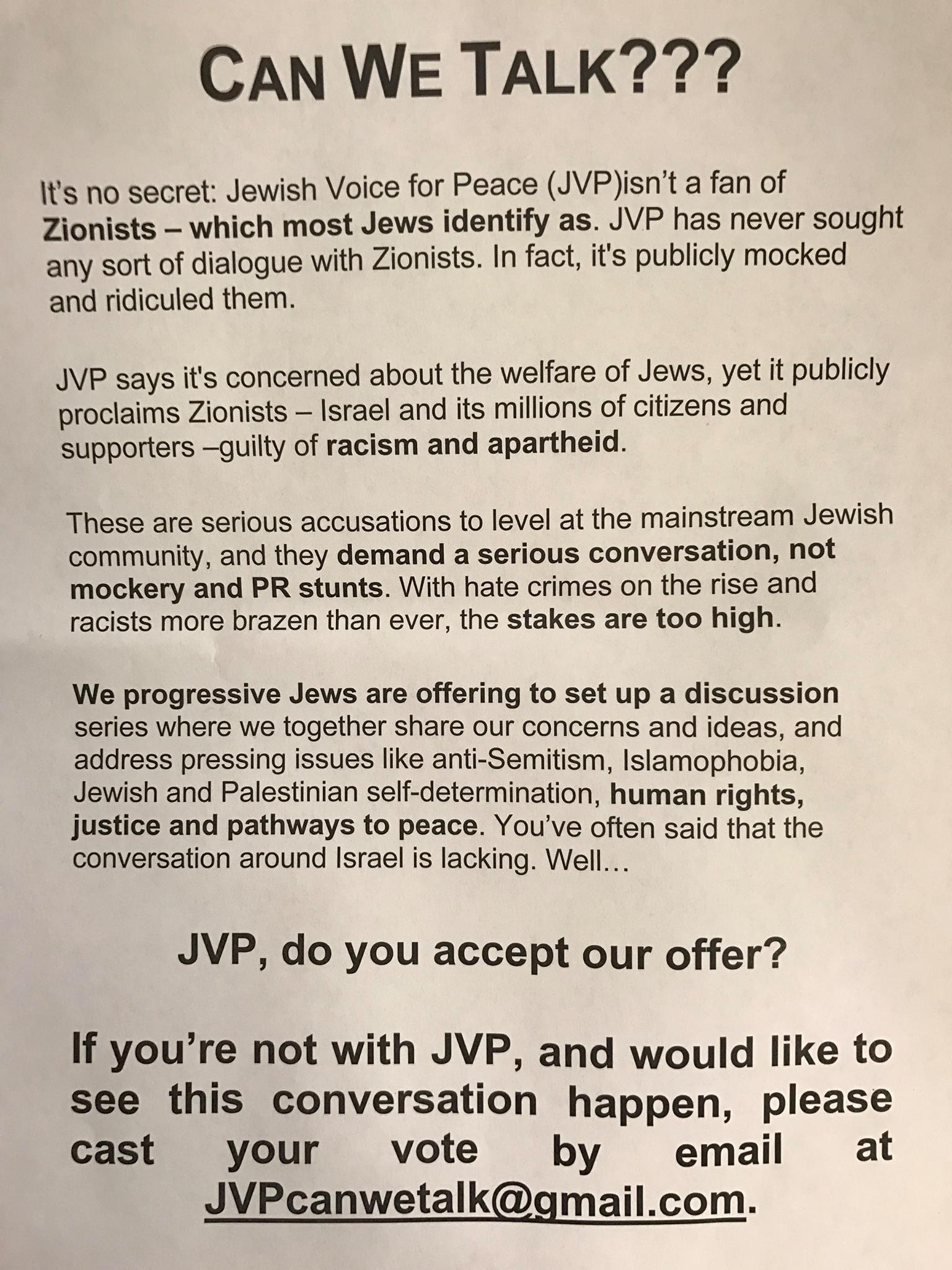