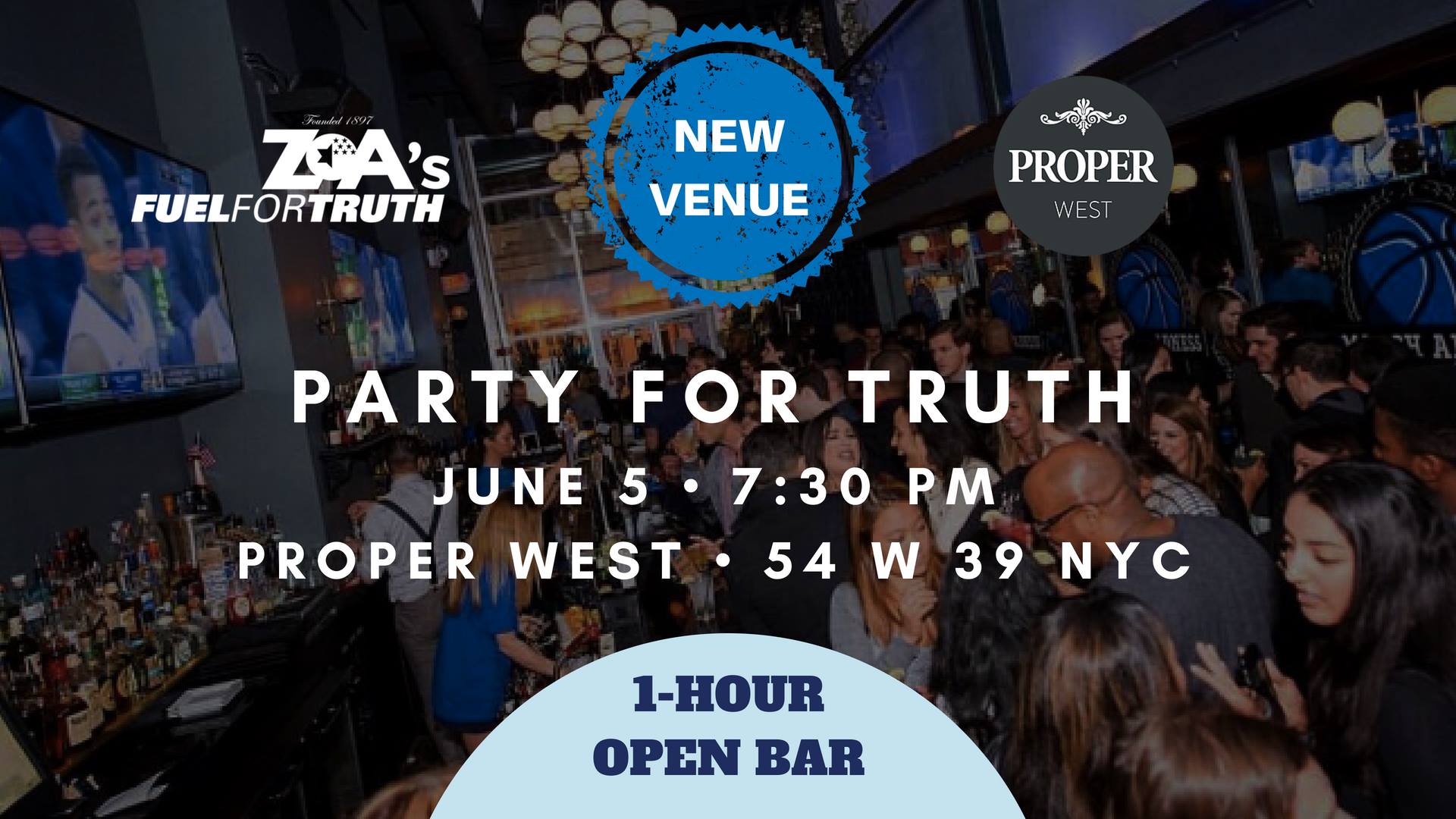 TONIGHT'S NYC PARTY FOR TRUTH IS ALMOST SOLD OUT

REGISTER FOR THE PARTY

Even if you're unable to attend, you can still participate in the party's online silent auction! Every dollar raised goes directly toward training more young people to be effective advocates for Israel through our signature Boot Camp program, so support a great cause while snagging yourself some awesome goodies.
SIGN UP FOR THE SILENT AUCTION 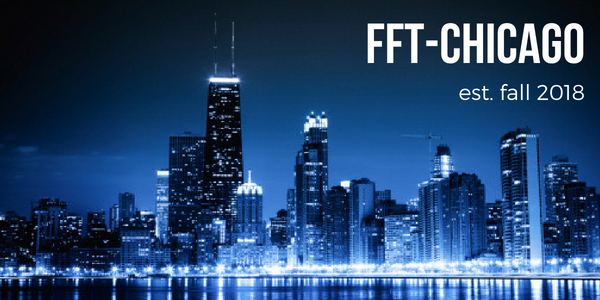 BOOT CAMP IS COMING TO THE WINDY CITY

With the success of our Miami and Boston expansion, and as part of our mission to bring Boot Camp to every major American city, we're excited to announce the launch of FFT-Chicago in late 2018! As we saw with reactions to the US Embassy move to Jerusalem and the violent protests along the Gaza border, public ignorance and the spread of misinformation are making it more and more difficult for local Jewish communities—especially young people—to effectively respond to accusations against Israel. The majority lack the fundamental facts, skills, and confidence to have these conversations. It's time to build a strong and active community of young people along Lake Michigan who want to stand up for Israel and be part of something bigger than themselves. 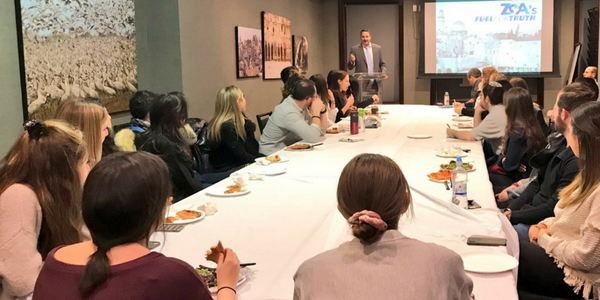 Boot Camp is already the premier Israel advocacy training program, but we're taking the summer to make it better than ever. Get ahead of the curve and apply early for the fall class in your city! We accept applications on a first-come-first-serve basis, so do yourself a favor and apply today. Spread the word to your friends and family and let them know. 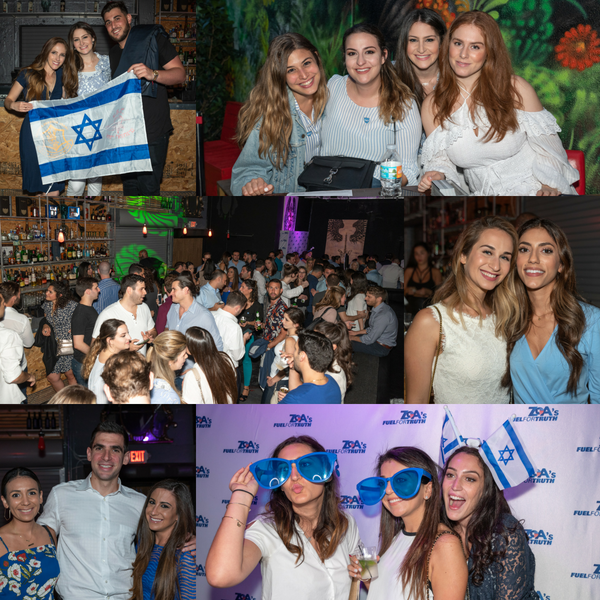 PARTY IN THE CITY WHERE THE HEAT IS ON...

FFT-Miami's second Party For Truth at Wynwood 5th Ave was a great success, bringing in over 100 attendees and raising more than $6,000 for Boot Camp! We would like to thank all attendees and silent auction donors and participants, as well as express our gratitude to our local program, party, and community sponsors: ZOA Florida, SPR Insurance Group, Groisman PLLC, Falic Family Foundation, The Rok Family Shul, Young Jewish Professionals Miami, Mask Booths, LC Photography, Coolam Productions, and the wonderful staff of Wynwood 5th Ave. 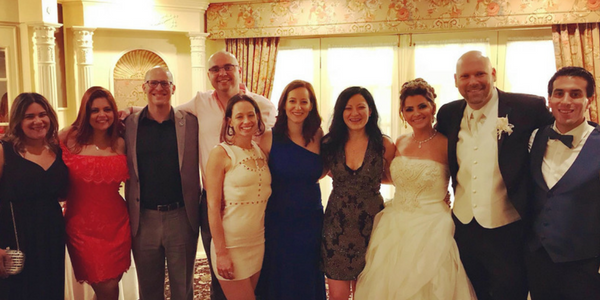 TWO OF OUR OWN TIE THE KNOT

It's no secret that life-long relationships come out of Boot Camp, but did you know many pairs have gotten married as a result?Mazal tov to the latest couple, Dave and Adele, and thank you for sharing this amazing moment with your FFT family. We wish you nothing but love, health, and happiness in the life you build together. 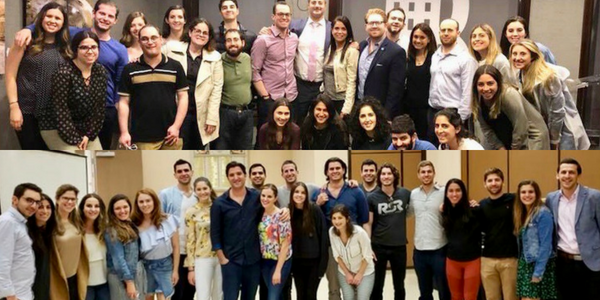 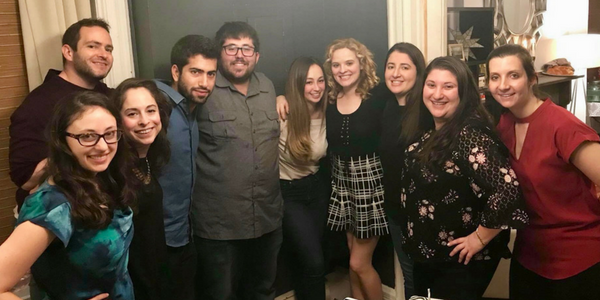 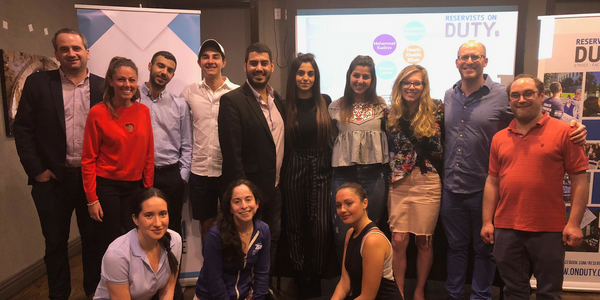 THE NON-JEWS DEFENDING THE JEWISH STATE

What is it like to be a minority in Israel? What does it mean to be a non-Jew serving in the Israel Defense Forces? FFT members got to hear firsthand about the beauty and complexity of that experience from the Muslim, Christian, and Druze members of Reservists On Duty during a special event at the Brownstone. 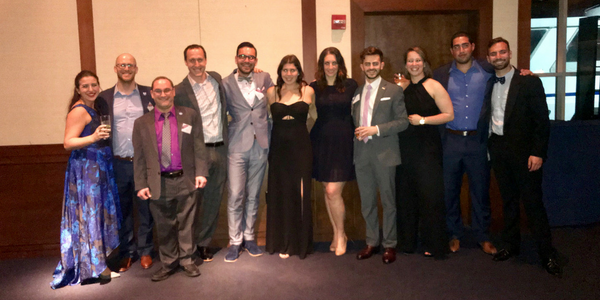 CELEBRATING THOSE KEEPING THE MEDIA HONEST

Many of our Boston Boot Campers and community leaders are also dedicated employees of the media watchdog CAMERA, so it was all the more special to attend their annual gala and support the work they do to monitor and promote accurate and balanced coverage of Israel and the Middle East. 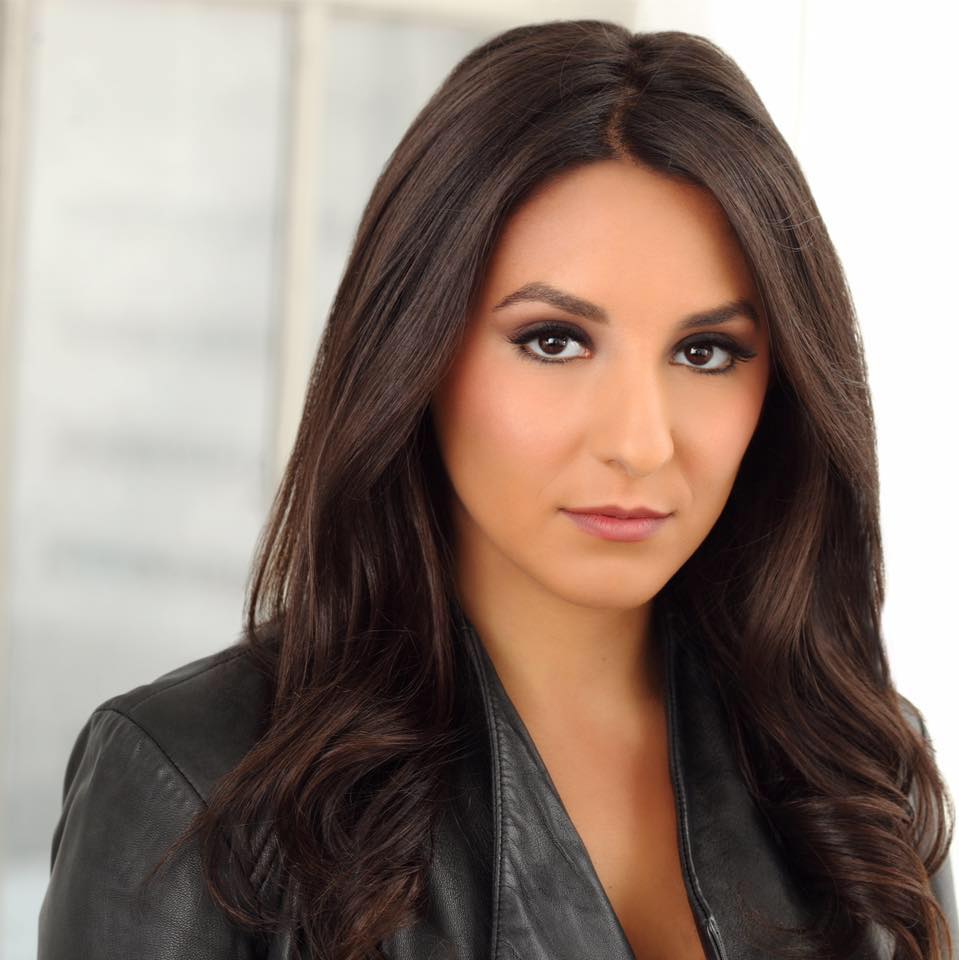 Five years ago, during the summer of 2013, I was a recent Tulane graduate with a growing passion for Israel. One year later, that small fire inside me, finally sparked. By 2014, I was a board member of Friends of the Israel Defense Forces, a graduate student at New York University studying journalism and Israel Studies, and a Fuel For Truth Boot Camper. My passion for Israel grew, with the help of Fuel For Truth.

Growing up in Manhattan, I was surrounded, for the majority of my childhood, around Jewish peers, Jewish parents, and Jewish teachers. I knew about the Israeli–Palestinian conflict, but I saw myself as an American girl, living on the outside, and powerless. Upon entering graduate school, for the very first time, I saw myself as the minority. I was in a journalism program of fourteen elite students from around the world, and one of two Jews. As Israel was defending its borders from Hamas, during Operation Protective Edge, I found myself alone at school. My classmates sided with the Palestinians. My teacher was opposed to Israel. And Students for Justice in Palestine was rallying on NYU’s main campus.

I thought, "How could to this be, only a few miles from home on East 56th Street?" The hunger inside me to fight for Israel was ignited. I felt it was my duty to set the record straight. Some people might wonder why a young American would be worried about a war halfway across the world. But ever since the Holocaust, Israel has coined itself the safe haven for the Jewish world. My safe haven was being threatened on campus.

So, every Tuesday after class, I went to midtown Manhattan for Fuel for Truth. After ten classes, I learned skills to strengthen Israel’s image around the world, using facts and historical analysis about Israel and the Middle East. I learned tools to have meaningful conversations about these topics within my own network at NYU. These newly established tools allowed me to think deeper about the conflict. And then I thought, how do we fight this at home?

Entering my final year of graduate school, I was prepared to figure that out. And for my Investigative Journalism capstone, using my strong ability to uncover complicated issues, I decided to investigate Students for Justice in Palestine. From a small string of information of anti-Semitic activity on campus, I stayed with a story, which turned into a two-year investigation. My ethnographic research into an NYU non-profit student group found connections to a designated terrorist in Chicago and funding that linked multiple groups to a terrorist organization in the Middle East. Ultimately, I unraveled a story that exposed the student-run 501(c)(3) to illegal fundraising, financial ties to terrorism, and 135 NYU faculty members with radical extremism intent to reform student beliefs.

Not intimidated by complex information, my tenacity pushed me to dig into this story, getting to the core of the issue. I read through lines of grey, with an understanding that not every story is black and white. And it was all because of Fuel for Truth. However, my journey had just begun.

I am now the Digital Diplomacy Director for The Consulate General of Israel in Miami, handling Hispanic, Christian, Media, Cultural, Political, Economics, and Academic Affairs alongside both Consul General Lior Haiat and Deputy Consul General Guy Gilady. With a new frontier for battle online, it is pertinent that Israel engages in social media with the utmost strength. And as the social media landscape is changing fast, our tactics for digital diplomacy must evolve at equal speed. It’s not just a battle of ideas, there is so much more. It’s where the game is played—an information warfare where lines are crossed and the truth is distorted.

So we develop strategies in cyberspace: curated partnerships, garnered content, targeted audiences, video campaigns, sponsored tweets, and conferences with young leaders, Jewish professionals, and change makers. We produce journalism for the web. As a result, we create an innovative and modern tool. "We create direct contact with our audiences, not through the traditional media gatekeepers," said Consul General of Israel in Miami Lior Haiat. "Engaging in conversation with our audiences and not just a one sided communication, but more of an interactive experience of Israel."

We create a 3D image of Israel on the internet, with 360-degree views of policy, culture, technology, and personality. We show the world Israel. The real Israel. But just like you—we are building mosaics. And Fuel For Truth is a part of mine.

Advocacy Tip
Pay less attention to people's positions and focus more on their values. People's political stances are the products of their emotional stake and their values. By determining their values you can reframe your positions in a way they will support them.

The Missing Peace: The Inside Story of the Fight for Middle East Peace

Dennis Ross, the chief Middle East peace negotiator in the presidential administrations of George H. W. Bush and Bill Clinton, recounts the peace process in detail from 1988 to the breakdown of talks in early 2001. It's all here: Camp David, Oslo, Geneva, Egypt, and other summits; the assassination of Yitzak Rabin; the rise and fall of Benjamin Netanyahu; the very different characters and strategies of Rabin, Yasir Arafat, and Bill Clinton; and the first steps of the Palestinian Authority. For the first time, the backroom negotiations, the dramatic and often secretive nature of the process, and the reasons for its faltering are on display for all to see.


Colliding Dreams recounts the dramatic history of one of the most controversial, and urgently relevant political ideologies of the modern era.

The century-old conflict in the Middle East continues to play a central role in world politics. And yet, amidst this fierce, often-lethal controversy, the Zionist idea of a homeland for Jews in the land of ancient Israel remains little understood and its meanings often distorted. Colliding Dreams addresses that void with a gripping exploration of Zionism's meaning, history and future.

The real crisis of liberal Zionism

"When a journalist speaks authoritatively on Israel’s perpetual occupation without mentioning Palestinian rejection of Israel and the two state solution, the result is a dishonest understanding of Israel’s predicament. This dishonesty betrays progressive values."

"The problem here goes beyond the hateful rhetoric of a particular scholar; instead, this view has been encrusted into the institution’s philosophy. Columbia’s atmosphere has been marred by ugly calls for an intifada (terror attacks against Israelis), and a failure by the administration to denounce hate groups on campus."

You can also make a one-time or monthly gift that goes directly to transforming the lives of pro-Israel young professionals. All donations are tax-deductible. Click here to learn more.